The Prodigy’s Baby’s Got A Temper celebrated its twenty on July 1 this year. In the first part of our write-up related to the single, we shared some details of its creation. But the whole thing about this banger is not only the song or the lyrics themselves. The buzz around the ‘Baby’s Got A Temper’ exemplifies that it all works in close connection with the visuals as well, so today we’ll tell the story of it: the cover artwork, the music video, the promo stuff, and the merch related…

In several episodes of the Flashbacks of a Fool movie (released in 2008) you can see exactly the same doll from the ‘Baby’s Got A Temper’ cover!

All the way through, Liam Howlett openly acknowledges the ‘Baby’s Got A Temper’ release was a mistake, as the label pressure, negative press reviews and the band rifts did their job. At the same time, while being interviewed by DJ Ron Slomowicz, Liam recalled that the best thing about that record for him was the single cover and the sleeve artwork. It was created by Jimmy Turrell, a graphic artist and video director from the UK. He combines a love of handmade collage, drawing, screenprinting and painting alongside digital techniques.

‘Yo mate how’s it goin’, it’s Liam from The Prodigy here mate, fokin’ lovin your stuff, it’s incredible, I want you to to do the fokin’ next single mate!’

In the public talk at the Glug London Jimmy spoke passionately about how did the story began. One day Liam Howlett had seen the work in Seven Magazine, where the now-well-recognizable ‘Baby’s Got A Temper’ font was used. Howlett called Jimmy’s office and commissioned him to do the artwork for the next The Prodigy’s single, the first one in the five years of silence after the world-famous ‘The Fat Of The Land’.

Jimmy Turrell: ‘Old typography collage I just found at the bottom of a draw. This artwork became the basis for The Prodigy single. I actually did it at college back in the day’
Turrell had a meeting with Liam and XL Recordings, where The Prodigy headmaster shared his view about the concept. The brief was to create a package and cover that was loud, bold, and aggressive, and that reflected the music of The Prodigy. The initial idea came from hearing part of the track, which had the sound of a creepy laughing policeman doll. Liam wanted to give the artwork a sinister, malevolent feel, so the policeman on the single cover seemed perfect too! Jimmy had to hold on the phone for ages and finally, he caught up with the guy called Jeffree, who collected old fairground memorabilia. His ingratiating voice was like ‘Hello Jimmy, come down to the house and I’ll show you my policeman puppet…’, and the whole story began to resemble a beginning of a bad horror movie. Turrell laughs, recalling it: ‘I nearly got murdered by this ‘vintage puppet collector’ while shooting a cover alone in his basement!’

‘And here it is, the Jolly Sailor…’ — Jeffree said. After Jimmy’s puzzle about what does laughing policeman has to do with the sailor, Jeffree answered: ‘Oh, don’t worry about that Jimmy, I’ll just change his little trousers and the hat…’

After seeing the final outfit Jimmy was totally confident that this was the one he was searching for so long.

The ITC Machine was used for The Prodigy’s logo, as its bold uppercase geometric letters add strength and confidence to the band’s message. Jimmy also faxed the letters to give them a distressed feel. The ‘Baby’s Got A Temper’ title, a hand-rendered chop-up of the typefaces Platelet and Citizen, has been applied using acetate. The policeman was cut straight from the photograph. A standard gatefold-panel Digipak was chosen as the packaging, but with a matte finish, which gives the CD a more earthy feel. There are several official edits of the single cover, which have minor differences.

In addition to the CD release, The Prodigy showed up a ‘Baby’s Got A Temper’ DVD with the music video and its making-of footage, — Jimmy also created a separate cover for it, which differed quite well from the CD artwork.

Jimmy Turrell for itsnicethat.com: I actually did a whole album campaign for The Prodigy which then got killed right at the final hurdle. It was my first big job, and I presented way too many options, which ended up confusing everybody. The whole process went on for a year and a half. It made me want to quit design altogether and do something else entirely. Instead, I went back and did an M.A. at St Martins, and then I also got an agent which changed everything.

Jimmy created over 500+ sketches for The Prodigy’s then-upcoming ‘Always Outnumbered Never Outgunned’ LP cover artwork, and then task was delegated to INTRO UK. In the very last moment, Liam changed his mind again.

The ‘Baby’s Got A Temper’ video was filmed in the middle of May 2002, just a month and a half before the release of the single. The location was the old power station near Prague in the Czech Republic — this former metallurgical plant Poldi was based in Kladno. Video is directed by Traktor: as they write about themselves, ‘Traktor have directed some of the most iconic film work on both sides of the Atlantic’. There are many Czechoslovak communist-era properties—the car in the opening scene is the last model Škoda 120 L, the time clock is a classical Elektročas model and the carousels include flying (hydraulic arm) swans made in Bílovice.

The video received its TV premiere on June 5th, 2002 at 9pm on MTV2 (UK). Speaking exclusively to NME, Liam Howlett explained that the video had come to him ‘in a dream’, adding: ‘We built a funfair in the grounds of this power station (in Prague, where the video was shot) and we had an arena of cows and three guys go to work as the band and play to these cows, who generate milk. No one’s allowed in this arena with the cows, the cows are milked and the milk’s passed out through a gap to the people’.

In exchange, the people in the video hand over money and jewelry. ‘Cos the milk is like their fucking buzz, y’know, it’s like a drug reference I guess,’ said Howlett. ‘This one will be memorable. This is a good video’.

You may find the original ‘Baby’s Got A Temper’ music video on every platform you like, that’s why we share the alternate version of the video. It differs features several rare frames from 3:20 to 3:37. The episodes where one of the girls dribbles milk from a cow’s udder on her belly, as well as some close-ups with another girl drinking milk while milking, have rarely been seen before online or on any of the band’s video releases. The same yellow hue used on the film that Traktor used in Fatboy Slim’s ‘Ya Mamma‘.

Check out some rare footage from the video shoot below!

As mentioned above, The Prodigy also released a ‘Baby’s Got A Temper’ DVD. This release has a small two-minute episode as a bonus: against the background of black-and-white shots from making-of footage captured by Traktor and Rockstar, the narrator briefly retells the synopsis of the video. It all looks quite ironic as the calm and confident voiceover reminds of the old-fashioned movies from the second part of the 20th century. Pure English humor.

Meet three men who work for a living, for money. Arriving in a shared car as if they work at a fairground on the outskirts of an electrical city. They don’t really fit in and stand out from the other workers. Walking through the twisted fairground, they produce small canisters of milk from their suit pockets. Without pausing, they knock back the milk and whurley empties behind them as they press on.

They marker a fact they get to work changing their clothes to leather and twisted garments, but as they apply makeup their features and faces start to become bit by incredible bit recognizable. Sixty percent Keith forty percent librarian blurts the first line of the song into the mirror. He is warming up. We start to recognize bits of Liam. And the stern guy with his back to the others looks like… Maxim!

Together, they exit through a door. The door leads out onto a stage in an underfunded performance space. By now they are fully-transformed and fully-fledged Prodigy. Against the glare of the lights, we realize that the audience is completely made up of… cows. This is no surprise to the band. This is sexy business as usual as Keef launches into full farm punk frenzy.

Sexy but troubled pale girls in snakeskin bikinis milk the cows into small glass canisters. Mothermilk hurriedly gets the canisters out through a hole in the wall to a booth outside. They shouldn’t be doing this, but sometimes your work ethic subsides with time.

The French boxer sells the milk to a line of workers from the adjoining factory. Some simply need the milk so much that they chug it down right away. The workers lose their bearings. It’s a frenzy! In the flurry of milking, some of the girls try to steal some themselves. But it’s not easy! What with milk, mama keeping a watchful eye.

The band finished their performance and exit the stage. And transformed back to their grey middle management faces, double chins and bad suits. They share their slim pickings from a day’s work at the squit buzz attraction. As always, they tip the guard.

The merch and the promo campaign for the single were closely related to Jimmy Turrell’s cover artwork. He worked out some special stuff for The Prodigy’s official store and provided bits of his unused artwork for the band’s website and for some promo releases.

Maverick even droped a special website dedicated to the single release, where the exclusive content for the fans was available! The link to this page was given on some of the label’s enhanced CDs. The concept, design, development and implementation of an enhanced CD with interactive and online components were developed under control of Slender Fungus. 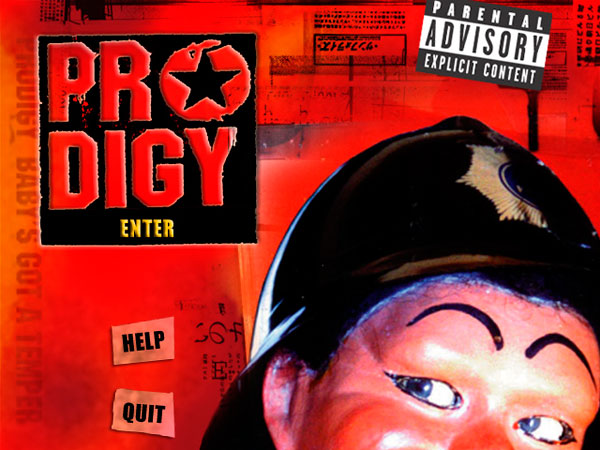 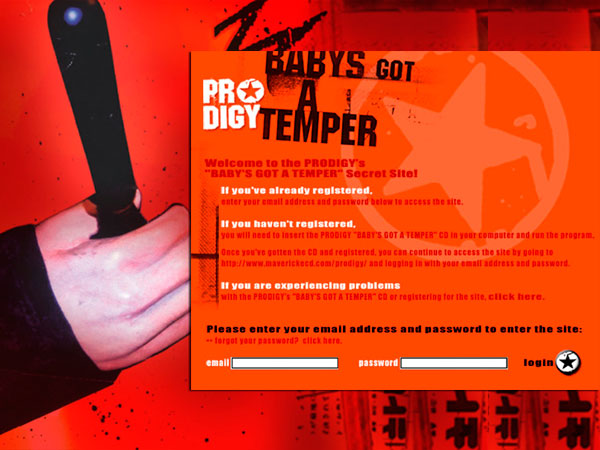 There’s also a special artifact from 2002 times which is still awe-inspiring behind the fans. A french promo-only ‘Baby’s Got A Temper’ box set released by Delabel featuring a 1-track promo CD, 1-track promo video, replica pellet gun, mock pill capsules and the promotional police report in French text. All are presented in 9″ x 12″ x 4″ custom printed cardboard box. Do you recognize this baby? 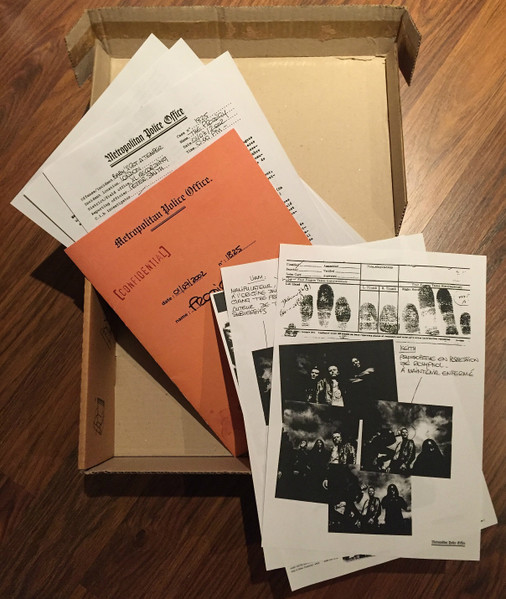