This December, as 2021 is approaching its end, we’ve been really surprised to find out that not a single fan community had remembered about «Trigger» and «Nuclear» 20th anniversary. These live tracks still remain unreleased, and the fans won’t give up hoping to hear their studio versions one day. With today’s entry, we’re launching a series of articles dedicated to the year 2001 in The Prodigy’s history. As usual, there will be a lot of interesting stuff for you to discover!

A little over 20 years ago, the long-awaited comeback of The Prodigy took place after two years of silence. As you know, after the stunning success of «The Fat Of The Land» LP, once the band was done with the gigs in mid-1999, The Prodigy decided to have a break for an indefinite period. Liam Howlett himself even called TFOTL the final album for the band. The coveted comeback arrived in the summer of 2001, as the guys did gigs at four different venues within eight days. During that time, several fresh post-TFOTL tracks debuted at the gigs — they were very close to «The Fat Of The Land» sound- and concept-wise, so the fan community met the new stuff with much excitement. 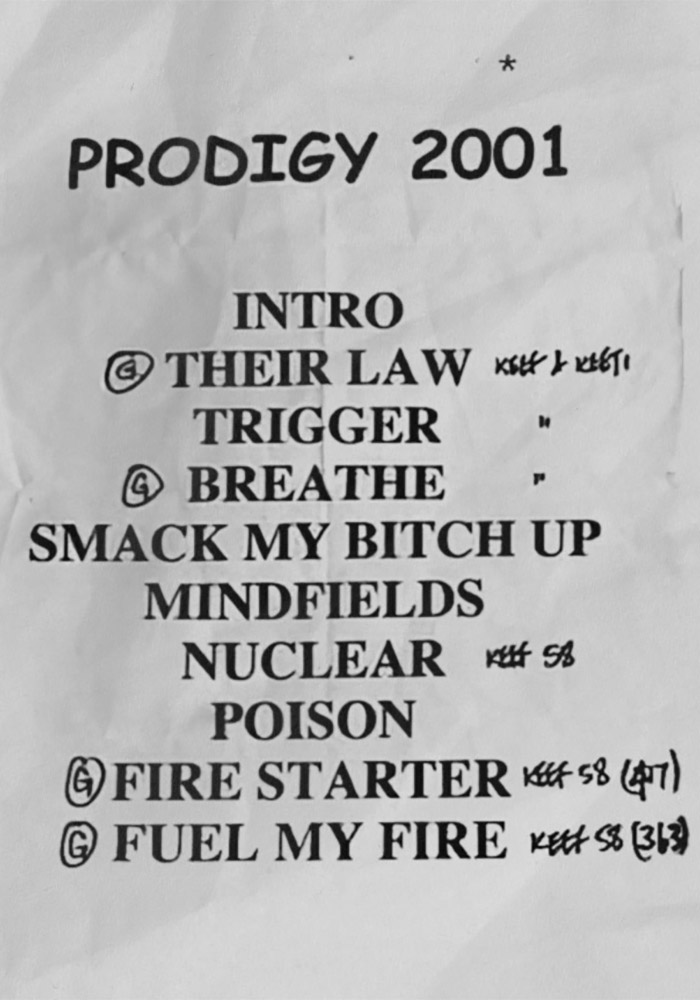 The militant title of the new album, «Always Outnumbered, Never Outgunned», had already been known by the middle of 2000, and the 2001 comeback marked if not its nearest release then at least an intense production process. Millions of fans around the globe were waiting for the loud return of the band like never before. The gigs took place in August: Rock ‘Oz Arenes Festival (Switzerland, 17/08), Bizarre Festival (Germany, 18/08), Lowlands Festival (Netherlands, 24/08), and Pukkelpop Festival (Belgium, 25/08).

A new live intro was inspired by «The Great Escape» movie, while the band themselves were obviously experimenting with the militant aesthetics. Accompanied by the sounds of a sharp drumroll, reminiscent of an army march, The Prodigy presented their brand new logo — it featured a lone star instead of the well-known ant, and next to it there was a silhouette of a head with a missile inside of it. Different missiles, weapons, jet fighters, tanks and bullets would be also used in the band’s website design later on, in 2002. The intro’s ending line «I believe that you and me last forever» (sampled from «All Day And All Of The Night» by the Kinks) confirmed: The Prodigy are fucking back and they’re not gonna surrender without a fight.

Full audio restoration in high quality is available on our Patreon!

The titles of the new tracks, «Trigger» and «Nuclear», were also unambiguous: the band was ready to attack once again after a short break. While «Trigger» had the same arrangement throughout all four gigs, «Nuclear» was being modified right along the mini-tour: the first version was played on August 17th in Switzerland, but the German fans heard the second edit right on the next day.

You may check out some nice fan reviews from those 4 gigs here: theprodigyontour.com/?cat=13

As Martin James states in his «We Eat Rhythm» book, the short European tour turned out to be really successful for Liam. Right after being back in the UK, Howlett immediately agreed to visit the USA to support one of his favorite bands, newly reunited Jane’s Addiction. Master H. liked the convenient sequence of the gigs, so he got a chance to try the new material out. The August gigs were a great push for the band and Liam finally found the inspiration to focus on his current goal, producing the new album of The Prodigy.

But eventually, the US tour was canceled, since due to the 9/11 attacks the band felt it would be unsafe to go there. Anyway, the band arranged the gigs at the Australian Big Day Out festivals for early 2002, so Liam had some time to work on new material…

Audio restoration of «2001 Intro» is already on our Patreon! Pt.2 will be available in a few days!