Our fresh article is on its way and now we are ready to walk through mindfields with you all. Of course, you’ve already guessed what we’re going to talk about: the fresh write-up from the FAT25 series will be devoted to the sinister Minefields. We’ll cover the topic of the cancelled single release and all of the track versions for it. We’ll also share the story about all promo releases.

For the first time a new track with Maxim’s vocals was mentioned in early 1996: Liam told about it in an interview for an Icelandic magazine before a gig in Reykjavik where the track debuted. It’s unknown when exactly the track was produced – in late 1995 or early 1996? Nonetheless, as with ‘Firestarter’, the track had no beta versions and debuted in its final version which it kept up until the release of the LP. Anyway, we’ve managed to obtain a rough mix which is not much different from the final version; still, some elements are missing in this mix.

Having become a recurring banger at gigs in early 1996, the track has been chosen for a single following ‘Firestarter’. The forthcoming release spawned lots of rumors. One of them was that Liam had to hurry with the next single because he was pressurized by XL Recordings. More detailed info about this fact can be found Martin James’ book. Anyway, the whole thing didn’t go further than a limited edition of advance promo release, so the ‘Minefields’ single was cancelled. Later, Liam would kill all the rumors related to its cancellation:

Liam Howlett to Martin James: I know there was a lot of shit said about me about it. It was all crap to be honest. The only reason I kept the single back was because I decided that the follow on from ‘Firestarter’ had to be stronger. I know ‘Mindfields’ is a good track but it’s a slow building track which isn’t direct,. I decided that I wanted the next single to have a kick like ‘Firestarter’ without being ‘Firestarter’ part two.

As for the promo run of the single, the story goes as follows. The test single was released as a limited edition with 10 vinyl whitelabels and around 50-100 advance cassettes – the exact quantity is unknown since various sources provide different info on that matter. For a long time, neither of these two variants were available, so there was not much info apart from a short article in the Record Collector magazine, where the ‘advance cassette’ format was mentioned. 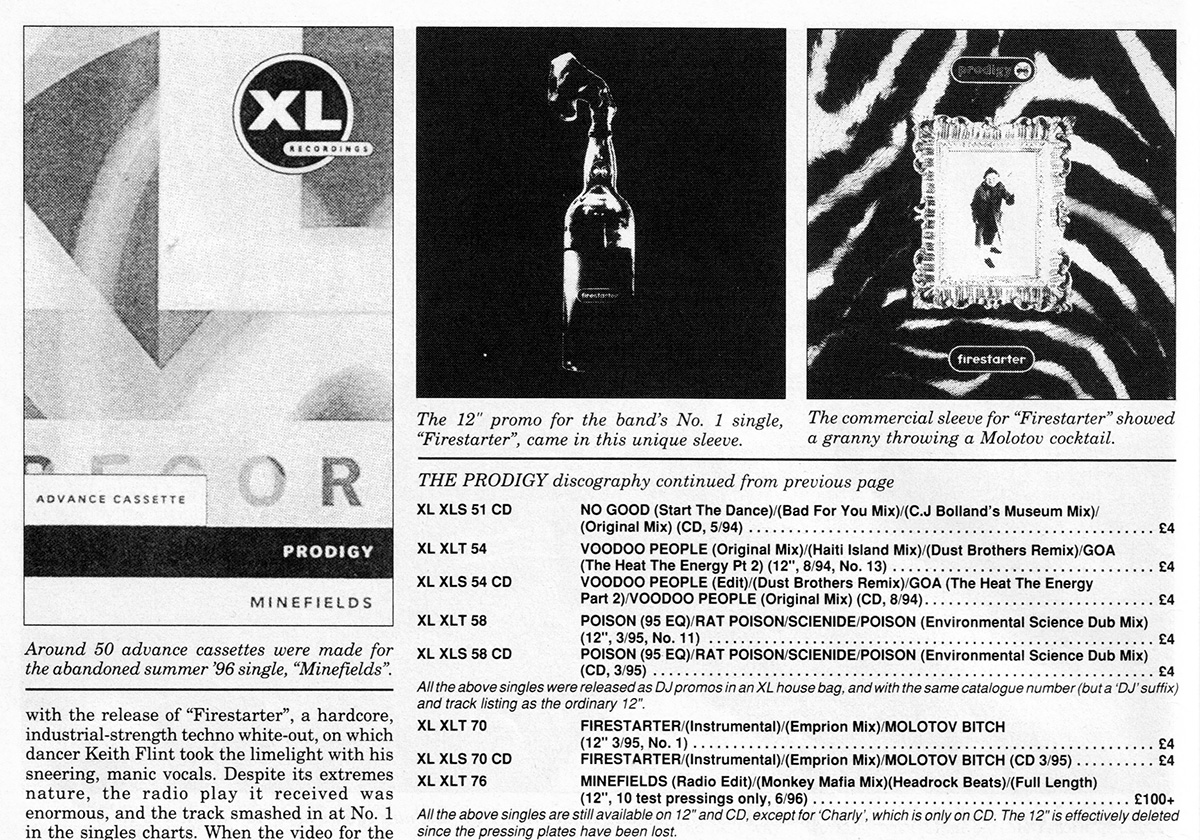 Only 16 years later, in 2012, the first detailed info about the vinyl test pressing started to emerge, along with some proper rips. It turned out that the tracklists for vinyl and cassette issues were a bit different. The vinyl whitelabel contained the following tracks: Minefields (Original Mix), Minefields (Monkey Mafia Mix), Minefields (Headrock Beats) and Skylined. Many questions popped up straight away. ‘Why is Skylined on that single? It’s a track from MFTJG!’ At first we assumed that the studio version of ‘Skylined’ was just a placeholder, so the final rendition of the release would’ve had its live-version. The same case was with ‘Their Law’ and ‘Poison’: despite of both of them being from ‘Jilted Generation’, they ended up on the ‘Breathe’ single as live recordings. But a bit later we’ve managed to find out where the legs grow. A few years later, a tape reel backup of a DAT cassette appeared on eBay. Here’s its tracklist: 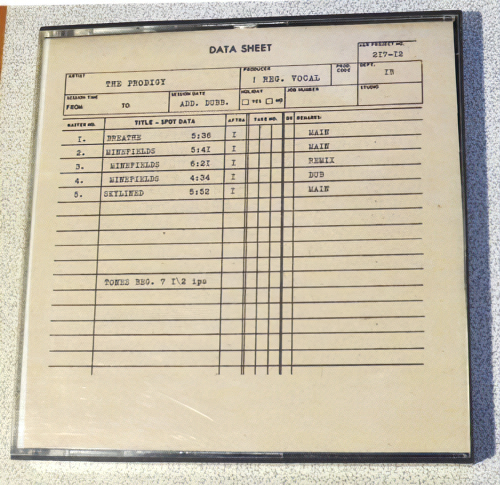 No prizes for guessing that the vinyl test pressing was based on the contents of said DAT cassette, minus ‘Breathe’. Still, the presence of ‘Skylined’ on the reel unclear. But having scoured through some releases of XL Recordings from the mid-90s, we’ve found a promo compilation released by XL in summer of 1996 – Summer Mixtape 1996.

This compilation, among other artist’s tracks, contained ‘Skylined’. Apparently, said DAT was recorded around summer of 1996 for XL Recordings and featured the following things: material for the forthcoming single, a track for a promo compilation and a finished track off then-forthcoming album as an alternative for the single. With that being said, it looks like four tracks ended up on the vinyl test pressing as it were on source media and ‘Skylined’ was a kind of imitated the B-side just because it was recorded on the same DAT.

The cassette edition of the single is a bit different. First, we have to make it clear that the catalogue number printed on the paper inlay of the cassette reads as XLS 76 CD. This means that the CD rendition of the single was recorded onto a promo cassette for demonstration purposes only. The CD version had no ‘Skylined’, which again proves that this track ended up on the vinyl just as it was on DAT. Instead of it, this CD (just like all the other CD-singles) contained a Radio Edit – a 4-minute short version for radio play and TV broadcast.

It’s worth mentioning that the ‘Radio Edit’ is only available on this advance cassette, whereas the other three tracks were released digitally on various media. ‘Monkey Mafia Mix’ was released on the Fresh Packed Cuts promo compilation in October 1996. ‘Headrock Beats; was eventually released on the Smack My Bitch Up single as Headrock Dub. And ‘original mix’ was released on The Fat Of The Land LP as Mindfields.

The tracks on said tape were recorded in dual mono, thus no stereo sources of the radio edit exist. The cassette itself is a BASF Chrome Super II – such cassettes were used at Masterpiece mastering studio in the 90s. The case contains a generic paper inlay with Masterpiece logo on one side and black & white XL Recordings artwork on the other side. It’s unknown whether the artwork was printed by Masterpiece or by XL Recordings. The paper sticker on the cassette has ‘Minifields’ printed on it (most likely a misprint). So if the ‘Minefields’ single had been released, ‘Skylined’ would’ve been thrown out the tracklist, so the contents of the single would’ve been similar to those of ‘No Good (Start The Dance)’ single:

Anyways, the single was cancelled and the track was just released on the album and renamed into MINFIELDS. We don’t know whose idea it was to rename it, but according to the credits, Liam is the only author of the track, which may mean that both music and lyrics were written by Liam (as it was with ‘Cocaine Kitten’). But it is also worth mentioning that just before the release of the album, ‘Mindfields’ was still considered as a candidate for the third single along with ‘Narayan’.

Liam Howlett to VOX magazine: I think this track could be a single, but it needs to be mixed again. It’s got elements that would make a good single. It’s kind of a follow-on from ‘Poison’ in the way, but obviously different.

But the story of the track didn’t end with the release of the album. In 1999, ‘Mindfields’ became a part of the official soundtrack for The Matrix movie. The American label Maverick was in charge of releasing it. One can find an interesting promo CD with four different edits of the track:

Judging by the date embedded in the CD – March 12, 1999 – the promo was released a couple weeks prior to the release of the movie, and the edits were used on radio and TV for promotional purposes. It’s worth mentioning that said edits were produced by Maverick, so Liam has nothing to do with them.

For about 10 years, the track was played at gigs – from 1996 till 2005 – but later it fell of the live tracklist and was occasionally played in different versions. The track came back in 2008 as a weird mash-up/remix which was played only once or twice.

In 2010, for the Milton Keynes gig, ‘Mindfields’ was updated as a proper live remix which is played occasionally to this day.

Also, we can’t ignore an official remix produced by Baauer, the guy who started a craze with his ‘Harlem Shake’ flash mob. The remix was released in 2012 for the 15th anniversary of ‘The Fat Of The Land’ as part of Added Fat EP. Nonetheless, today it seems to be completely forgotten.

The next one is ‘Serial Thrilla’ with another fan-coveted single story. 🙂 Stay tuned and keep following us on social media!