In our previous soundtrack-related posts we remembered ‘Stand Up’, Liam H remix of Iggy Pop’s ‘Lust For Life’ and the banging ‘Invisible Sun’. Today we will share the most complete story about the legendary ‘Warning’ / ‘First Warning’ — this tune awaited a difficult fate. Like the tracks from our previous articles, ‘Warning’ ended up becoming the official soundtrack & score…

The ‘Warning’ story began back in 2004: according to the rumors, the earliest demo of this track was rebuilt from ‘Nuclear’ — presumably, a snippet of this early demo played on The Prodigy’s 2005 website.

Officially, Liam mentioned this track for the first time on September 4, 2004 in his blog.

Liam H: i am back in the studio writing a new tune with keef and maxim ,its fast and relentless.the fastest tune ive ever done!

A bit later, just before the live ‘Always Outnumbered Never Outgunned’ promotional tour started, Liam confirmed that the track is finished now and will definitely be played live. The official title is ‘Warning’, and the one and only Keef Flint does the vocals.

Liam H: i have just finished a brand new tune with keef called ‘warning’ .its off the hook and its gonna take peoples heds off! we will be playing it in greece at our first gig on the 1st oct. also just finished sorting out the live set and its firing…..aono re-pumped.

Anyway, ‘Warning’ was premiered live at the first gig of the ‘Always Outnumbered’ promo tour, in Athens on October 1, 2004 — since then, the track became a permanent part of the live show and did not drop out of the live setlist until 2008. Being interviewed by Neko on September 24, 2004, Liam lifted the veil of mystery about the new banger. 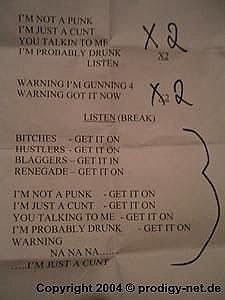 Neko: You also said that there was a new track with Maxim and Keith, which was the fastest track you had ever done. Is this the same as ‘Warning’?

Liam H: Yeah, it’s the same track. It started off with 175bpm, but its now 166bpm. We all were in the studio to rock it, and Keef seemed to have the vocals covered on his own. It wasn’t like “ok both will have to do lyrics”, because it often just complicates things and I wanted it to be simple to rock it live for people to get it first time they hear it.

Over these 4 years, this banger had been planned to be released several times, and the track sound itself has changed dramatically. At first, ‘Warning’ was considered to be released as a separate single, and then as a B-side. But suddenly in the middle of the ‘Always Outnumbered’ tour in 2005 Liam completely renewed the sound of the track, making it closer to the live vibe than to the electronic one.

It was due to the fact that Liam found the right atmosphere for live performances, which worked well for the band at that time — now on the stage, The Prodigy turned toward the mixture of punk and drum’n’bass. The main trick of this style mixture is a fast drum’n’bass beats based on live dirty drums sampling, — this type of sound was just coming into fashion at the time and contained non-trivial punk or even garage-rock attitude. In 2004-2005 D&B type of music had just entered the dance mainstream and was played in almost all big venues.

Liam was infected with this idea in the beginning of 2005, just before the ‘Spitfire’ single was released: Howlett was absolutely thrilled by Nightbreed’s remix of the title track. On the 16 February LH shared his thought about this killing tune in his blog.

Liam H: hey peoples–.NITEBREED hav just done a badass mix of spitfire.if u heard that pack of wolves track they did last year it will give u an idea of the sound– drum and bass punk rock .its of the wall. so 3 versions will be on the release. mine, ffs and this bomb.

‘Spitfire’ remixed by Nightbreed influenced Master H quite hugely: after ‘Warning’ was remade, another track with a similar sound appeared in The Prodigy’s live set. It was called ‘Wake The Fuck Up’ and became one of Liam’s permanent favorites for the gigs, — curious that it sampled Nightbreed Remix directly. 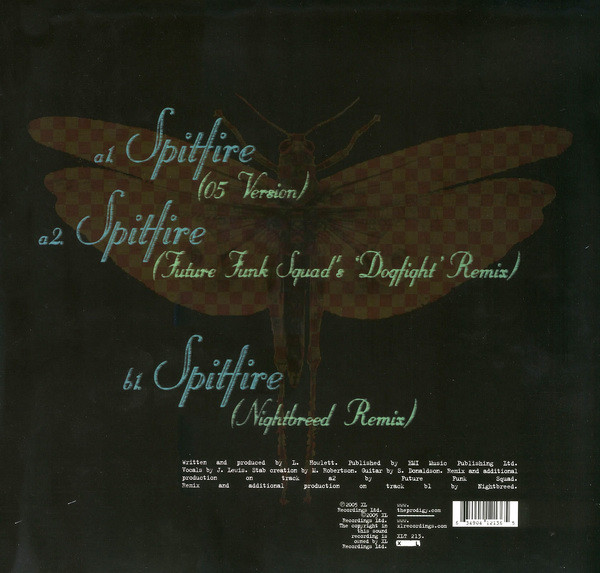 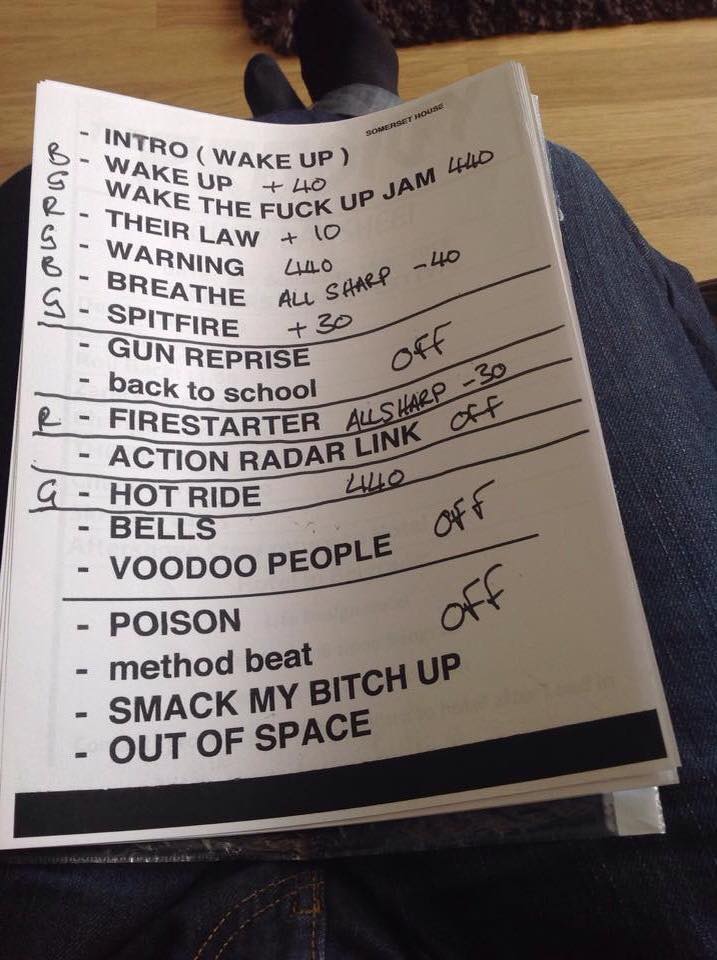 Later, working in the same direction, by the end of 2005 Liam would premiere ‘Heatwave’, the beats of it are also based on sampling/imitation of live dirty drums, though not with such a fast tempo.

And a little after, numerous clones of ‘Warning’ and Nightbreed’s ‘Spitfire’ were born: easy to remember ‘Run With The Wolves’, ‘Who The Fuck Is Eddy Cohran’, ‘Spitfast’, ‘Roadblox’, ‘Champions Of London’, and others.

Going back to the revamped Warning, it’s hard to say whether a new version is worse or better. Many fans, including the ‘All Souvenirs’ team, still adore its first 2004 version.

But one thing can be said unequivocally — ‘Warning’ had considerably evolved! Moreover, officially the new version of ‘Warning’ did not imply vocals at all even before its official release. In the license databases, it was registered as a separate track called ‘New Warning’, and Flint was no longer listed as a co-writer of the track, even though he continued to perform it until 2008. Probably, Liam already knew that the official release would be an instrumental one. 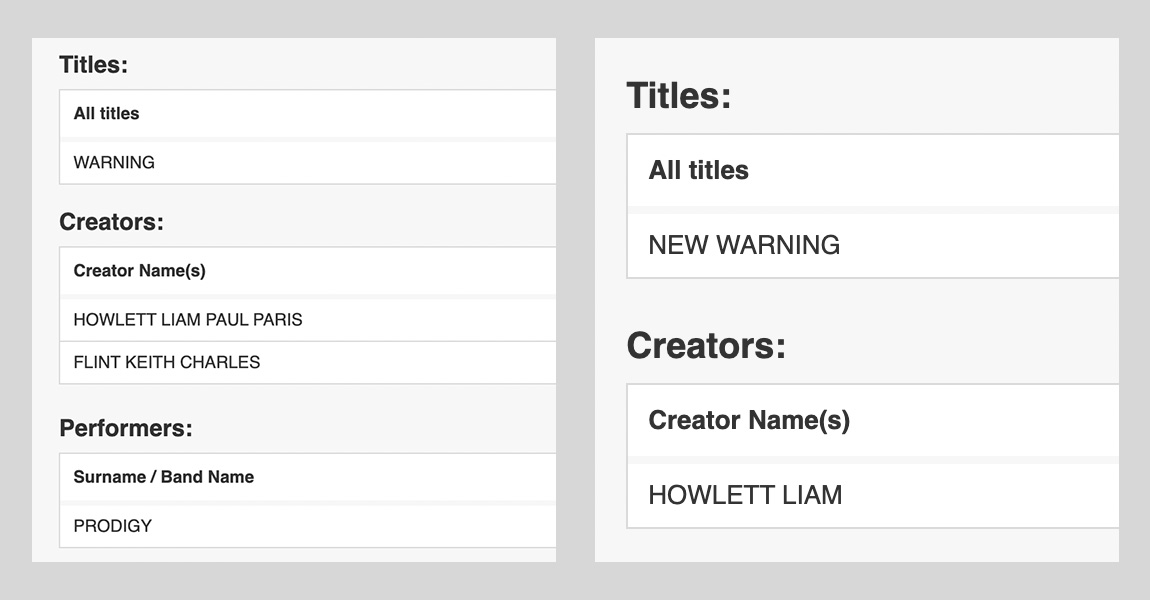 This way or another, the tune was officially remixed by the Backstage Sluts and surprisingly their version contained Keef’s studio vocals! The remix was broadcasted on XFM on Sunday, 29 May 2005.

Later, the guys from Backstage Sluts posted their ‘Warning’ remix on MySpace, and clarified some details in PM (credit goes to Etienne Lebon):

Backstage Sluts: It was a rough remix we did – its still needs finishing, we wrote some extra lyrics to it – so were not sure if it will see the light of day.

They also announced that this track was even meant for official release, but unfortunately, it did not happen. Most likely it was about the ‘Warning’ single, where the remix was planned to be released. As we can remember, ‘Warning’ had been considered as a candidate for a single during 2005, and Liam himself mentioned this fact a couple of times. For example, check out his blog quote from December 17, 2004, below.

Liam H: i have new traks like wake up full vocal version ,warning and ded ken but they r all potential singles after spitfire so they wont be on b-side. way it is remixes and spitfire mixes will b!

Nevertheless, the separate release was not destined to happen. A year later, being interviewed by Neko summer of 2006 Liam mentioned that the track plans to be released as the official movie score.

Neko: How about ‘Warning’, you’ve been playing that live for almost 2 years now?

Liam H: ‘Warning’ is a good live track, Warning instrumental is going on a film which I can’t talk about yet. It is an “in-between albums” track. I’ve put it on a film, really cool. It is actually a British film with American actors in. It’s about all these hitmen that are trying to attack this place at one time. But it is still under wraps so I can’t tell you much about it really.

Gradually information became more definite: a few months later ‘Warning’ was officially announced as the soundtrack to the ‘Smokin’ Aces’ movie. At the same time, it was reported that the track would be released as ‘First Warning’ and it would definitely not contain Keef’s vocals. If we dwell more on the ‘Smokin’ Aces’ soundtrack, we can note the fact that ‘First Warning’ was not just one of the tracks of the official OST: it was also used as a score, i.e. as audio background for some of the action scenes. And just as with the ‘Invisible Sun’ and the ‘Lust For Life’ remix, the score version of the ‘First Warning’ is really different from the officially released one. The score mix has some additional elements that didn’t make the cut into the final version — most likely Liam apparently added additional samples to the pack to diversify the sound for wider use by Clint Mansell, the film’s sound engineer, when editing the background music.

Clint Mansell: I can tell you this much…I’m pretty sure First Warning is the new track by The Prodigy. Liam gave me elements of the song which I worked into the movie-it plays as the theme for these nazis called The Tremor Brothers! I haven’t heard this finished version yet but the elements that I had sounded awesome! Vintage Prodigy!

A year later, in 2008, ‘First Warning’ will be used as the soundtrack again, this time for ‘Need For Speed: Undercover’.

Despite the fact that the official release of ‘Warning’ ended up being an instrumental one, the full Keef Flint vocal version still saw the light of day, albeit not in-studio sound. Of course, we are talking about the ‘World’s On Fire’ blu-ray 2011 release: that’s where you can watch ‘Warning‘ performed live at T In The Park in 2008 filmed by Paul Dugdale, — needless to say, it was with Keef’s vocals on it! 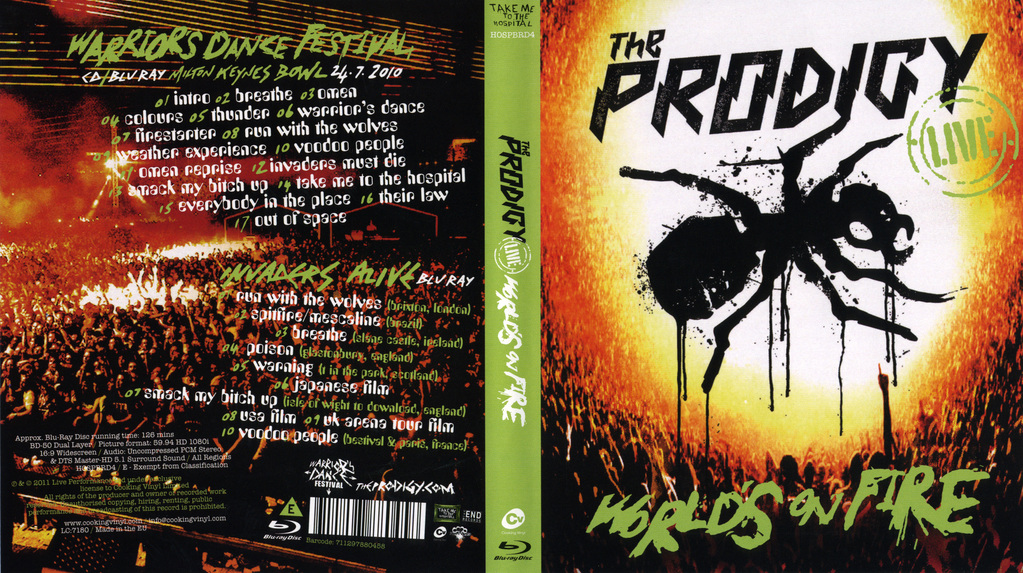 2008 was the last in such a long history of the legendary ‘Warning’, which was then replaced by its clone called ‘Run With The Wolves’. Why a clone, you ask? More likely ‘Run With The Wolves’ was recorded conceptually based on ‘Warning’ as a fresher replacement for the upcoming new album. ‘Run With The Wolves’ itself also used some elements from ‘Warning’. Moreover, in the working setlist of ‘Invaders Must Die’ LP and also in the live setlists both tracks were listed as a kind of common track: ‘Warning/Run’ or ‘Warning/Mug’. 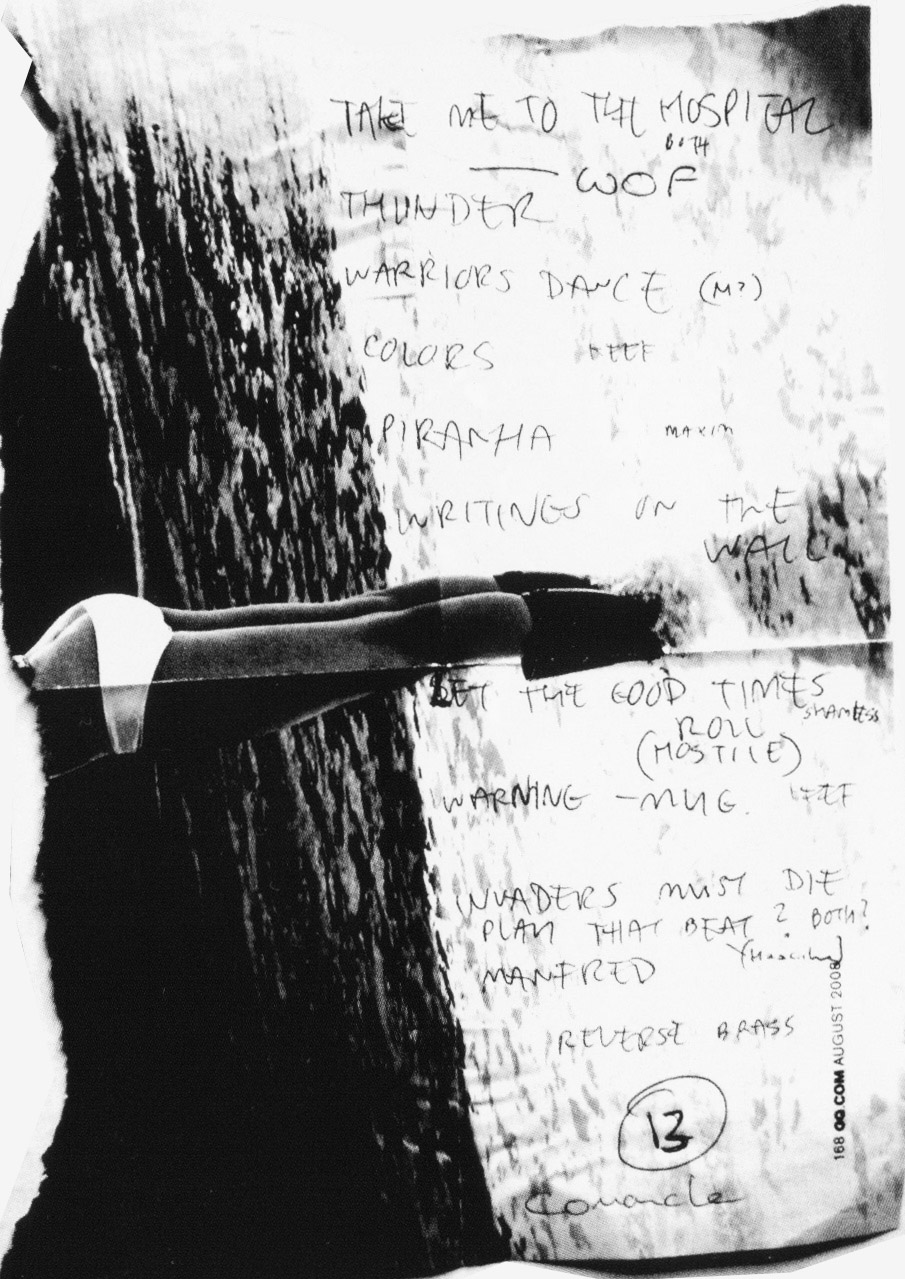 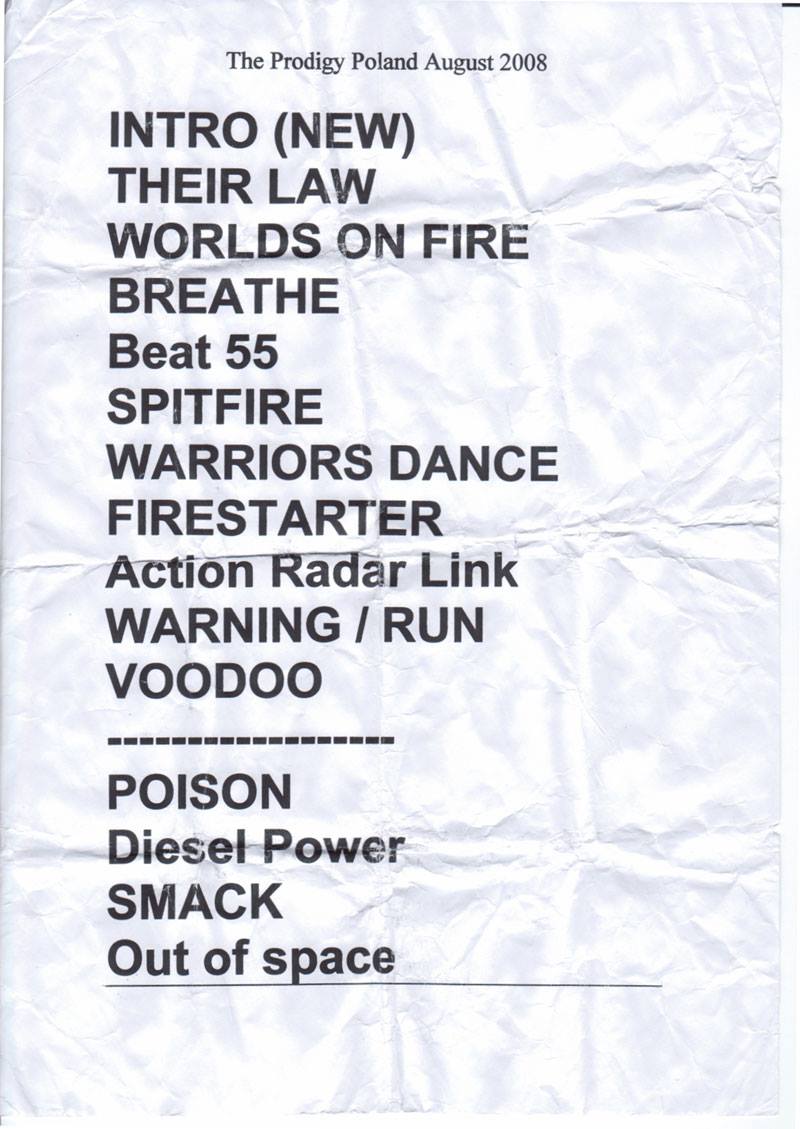 In our next post we will share the full story of ‘Shadow (Of The Devil)’ tune, which was also used for different soundtracks. Don’t forget to catch some exclusive stuff in hidden section!