The Prodigy’s ‘Girls’ was released a week after the ‘Always Outnumbered Never Outgunned’ album came out: the single showed up on August 30, 2004. ‘A delicious red herring of electro and breakbeats’, as Pitchfork described this oldkool tune back in the day, still sounds fresh and relevant in 2022. Today we’ll share the most complete story of the track, its recording and visuals. What’s more, we chatted with the designers’ team and got a bunch of exclusive details that had never been shown to the public before…

‘The vampires that landed from space and created the culture of Ancient Egypt were also very into electro club music. They decamped to Miami and continued to dance’ — that’s how the Intro UK team describes their ‘Girls’ promo. It was art directed by Anna Bergfors & Julian House with the invaluable help of Nikki Hildesley and produced by Intro UK.

INTRO UK is an independent creative agency with a longstanding reputation for producing ground-breaking work across all media. Established in 1988, Intro pioneered cross-media working: they were one of the first studios to do everything under one roof. This way of working is now more relevant than ever and allows the company to deliver high-quality creative solutions across every medium. They worked with Depeche Mode, Primal Scream, Placebo, Oasis, Can, and dozens of other great artists. Back in 2004, they created an album design for The Prodigy’s ‘Always Outnumbered Never Outgunned’. As well as designing the album packaging and sleeves for three single releases, Intro created a ‘Girls’ video and a TV campaign to promote the album. Julian House & Anna Bergfors were responsible for art direction, and Nikki Hildesley also made a huge contribution to the work. But first things first…

The music video grew out of the album visuals for ‘Always Outnumbered Never Outgunned’, and the idea was initially to bring the album sleeve to live. It uses a variety of film techniques, including stop-frame animation, 3D modelling and live action. Wikipedia states that the music video was made in late-2003 and early 2004, but that’s not too precise. Anna Bergfors recalls that the delivery would have been in September 2004, and the production must had started in Spring 2004.

Anna Bergfors: The production process took at least 2 months I think. A little more to shoot and do all the post… And the 3D modelling took an ages. Essentially 24/7 in the edit suite with 3D going along site for weeks. Pizzas and beers and no sleep to speak of. Nearly ruined me but cool!

Nikki Hildesley: The whole process took weeks, days of late hours. I’d leave Anna at the studio late and return to watch the recently created magic the next morning. She worked so hard editing that film. Julian House researched and created images and ideas with Anna. It was hard to know when they’d finish! Rendering also was a large part of the process, took ages and was frustrating at times! Finally, after some input from Liam Howlett, we got to a point where everyone was happy.

Nikki Hildesley worked really closely with Anna and Julian to enable them to create and capture the multiple elements for the films. There were several separate shoots during the process. The team shot the dancer girl and her pink lips with a full crew in a London studio. ‘The vampire teeth were proper ones and not joke shop stuff. I think used by folk that drink blood’ — Anna Bergfors laughs. They also set up a studio at Intro with their own lighting and camera equipment to enable the crew to film the rest of the props and the models required. It meant that the directors could be more flexible with how they shaped and dreamt up the visuals for the film.

‘It was a film where as soon as we all thought the film was ready, the beginning would need some more work!’ — Nikki recalls.

Nikki Hildesley: The process was key. It was great to have a decent schedule to work with. The band was quite hands-off through most of it. They trusted Anna and Julian to create something completely unique and it was. Always nice to be a gifted time and trust from a band. I was always surprised that it didn’t completely take off! I loved working with Anna and Julian and being part of it. It was a great team, a brilliant experience. Everyone should know this film!

Originally there were two versions of the video. The first edit was a bit more static than the final one and was more reminiscent of concert visuals than a full-fledged music video. Nevertheless, it had already set the bar high and looked really stylish and sexy! Then the team thought that this edit didn’t work well for the band, so they invited this kid, a friend of Rachel Howlett, to make some lip-synch and grimaces. Intro also added some more environment and the story to it, and that’s when it all came together!

Nikki Hildesley: So much Intro work hasn’t aged at all. I see reflections of it everywhere. Always loved the meticulously deeply researched and positioned collage work that Intro created and we all produced. It was a joy if sometimes hair-raising and I feel dead proud of that era of my life.

Anna Bergfors: That was indeed a number and very ‘now’ now. Lots of brain cells on the floor of the edit suite too, and obviously a star producer. Essentially the Ancient Egyptians were a race of outer space vampires who invented disco. That was the video treatment top level … fair enough really as I’m sure they knew how to party! At the end, we zoom out of the planet and it becomes a disco ball. The track samples made me think of Art Deco Miami which references Ancient Egypt. All the Miami tower blacks in the video are constructed from Akai samplers and drum machines.

Anna Bergfors: Another fun fact is that the original ‘Star Wars’ film was a big influence on some of the set piece 3d scenes with the parade and pyramids. Essentially the Death Star tie-fighter scenes!

Unprocessed image on the left and the final cover on the right.
Designed by Intro | intro-uk.com
The single cover was developed simultaneously with the music video. The hat on the single cover is really a British Army Officer’s cap in black and red colours originally. The drum machine/sampler serves as the nose here, and the lips belong to the pole dancer, whom Intro did cast for the video shoot, it’s her face on the drummer doll in the video too! 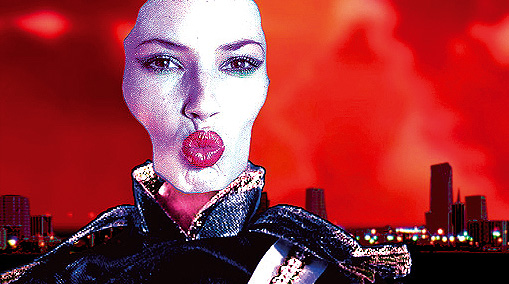 Anna Bergfors: Where did all these toy planes, toy pistols and the drummer dolls come from? Well, we built the model plane, it was one plane duplicated in post. We when shopping for most of the props which we’re all customized. The dolls we hand made by a stop frame animator. A guy called Henry Jones was the prop genius with myself and Julian House making the more simple stuff.

The world-famous shark shot located on both sides of the ‘Girls’ cover was captured back in 1994 by Carl Roessler. It is called ‘Maddened Attack’ and you must have seen it dozens of times in various forms.

Liam Howlett recalled back in the days: ‘I like the ‘Girls’ visuals, it suits the song, it’s kinda rock’n’electro, trashy. I’ve actually got that drummer doll from the video in my studio there, it’s rock memorabilia!’. Liam also lamented that Audio Bullys had ripped some ‘Girls’ ideas for their video ‘Shot You Down’, released in spring 2005.

Some of the visuals from The Prodigy official website back in 2005
Produced by Intro | intro-uk.com
Compiled by Eugene Riecansky & Rockstar | intro-uk.com

INTRO: Did technology play a big part? Well, technology is essential to finally composite the work but all maner of handmade and older production methods are used in the process, we find the hand made nature of the technique lends a raw and human quality to it. Don’t think that software updates are the answer.

There’s not really much to say about the recording process, but we’ve dug some details anyway. In an interview for MTV2’s Gonzo, Liam Howlett spoke at some length about how it all started. Actually, ‘Girls’ was the second track Liam Howlett wrote on the record (‘Wake Up Call’ was the first one for ‘Always Outnumbered, Never Outgunned’). It originally had just the old ‘84 Broken Glass sample for it. It was one of the few tracks where Liam actually with thinking about ‘Yeah, I want to use the sample’ and then create a track from that. Liam recalled that ‘Out Of Space’ was really the last time he walked this way. Going back to the idea of taking a sample and rocking a beat over it was a good point. Liam finished the track and thought it needed some sexiness that they haven’t had before to insert in this banger, and that’s when the Ping Pong Bitches came in! These girls brought some lovely sleaziness to the track which The Prodigy didn’t have before.

Moreover, during the conversation with Neko, it was mentioned that Kool Keith had originally participated in ‘Girls’ as well as in the ‘Wake Up Call’! His vocals were actually placed at the end of ‘Girls’. It was basically all the beats of ‘Girls’ all slowed down and Kool Keith came in and did like one verse of lyrics. But in the end that didn’t work, so this idea got shelved.

As you all may remember, the final single release contained the banging alternate version of the track — ‘More Girls’, and actually, Maxim rapped some lines from the legendary ‘Nuclear’ there! During the live sets, Liam often combined both mixes and played the acid mixture of two versions.

By the way Liam even planned to make a ‘Girls’ remix competition, however, the idea was not fated to become a reality. But we decided to implement this idea and made a hidden page with a competition where we posted an acapella of ‘Girls’ for your remix!

Two edit mixes were created for the single, the first one for radio broadcasting (3:33) and the second one for using in the video (3:48).

Also some special DJ-edit with duration of 5:27 can be found on the web. It was mixed by Mark Roberts: the track has been heavily re-structured, and a straight 4/4 drumbeat has been added at the beginning and the very end to make it easier for DJs to mix it together in their sets.